Title: The back of the turtle.

Set in the near future, following an apocalyptic environmental disaster, this is the story of a CEO, a scientist and a young First Nations artist.

Gabriel, the scientist, returns to Smoke River, the reserve where his sister and mother lived. He tries to kill himself by drowning, but does not succeed since he becomes distracted by rescuing people from the sea. He meets Maya (the young artist), a young man who lives at the nearby hotel, and a dog.

Back in the city, the CEO of Domidion (the company who created the disaster) is doing damage-control.

Told with Thomas King’s trademark humour and love of story, this is his first work of literary fiction in a decade and a half. It won the 2014 Governor General’s award for fiction. He is currently working on a 5-part comic mystery novel series about an ex-cop, Thumps DreadfulWater. I can’t wait.

His best-selling book, The inconvenient Indian: A curious account of native people in North America (DA50031), is an absolute must-read. It is being republished in an illustrated edition, so if you can read that the do! Also makes an excellent Christmas present, I daresay.

Thomas King has many books to his credit, both fiction and non, but these are the ones CELA has available. Also look for the CBC show he wrote and starred in, The Dead Dog Café Comedy Hour, a 15-minute broadcast that aired live from 1997 to 2000. It is so very funny and so educational, I recommend it highly. It is available on YouTube.

I had the great honour to meet him recently, at a library conference. Swooning may have occurred. (Cue the roaring fire.)

Remember: Stay calm. Be brave. Wait for the signs. 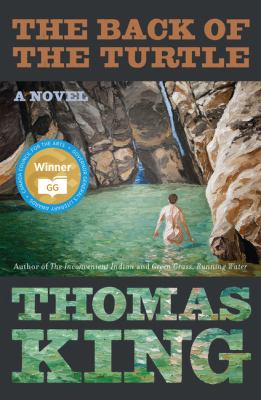